Often, debates in Parliament are full of emotions and confrontations, but MPs also have reason to smile. European communications agency Tonka wanted to know which MPs, and which of the two Houses smile the most. What we’ve found is that almost two thirds of the MPs wear a smile in their profile pictures. One in four MPs shows a more reserved smile, while over 9% have a serious look on their faces.

Members of the Conservative Party, Sinn Féin and the SNP appear to be the happiest

Of all the parties, Sinn Féin is the happiest, with about 83% sporting a smile. Members of the Scottish National Party are in second place, with over 68% smiling. However, nearly 29% of the Scottish MPs smile more timidly. Almost two thirds of the Conservatives show a warm smile and around 28% smile gently.

Liberal Democrats don’t smile much
The Lib Dems and Labour can’t find their smiles, it seems: one in four of them look into the camera with a serious face. It’s a similar story with Labour. A total of 11% look serious and only a quarter of Labour MPs wear a full smile.

Women look happier than men
Female MPs take a clear lead in our smile ranking. Nearly 78% of them look into the camera with a broad smile, while among men, it’s only 59%, and 12% don’t smile at all. That is four times as many serious faces as the women show (3%).

Who smiles the least?
Rarely ever do the Crossbenchers grin into the camera: almost a third of them don’t smile at all and only 29% show their teeth to the cameraman. Nearly 40% smile only a little bit. The Conservatives are also more reluctant to smile and about 30% remained serious in front of the camera.

House of Commons and House of Lords combined 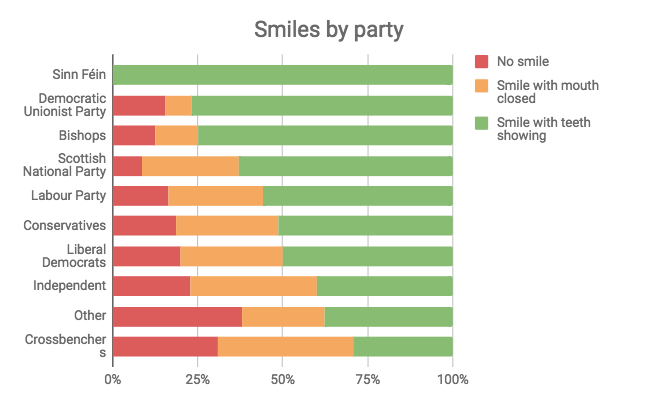 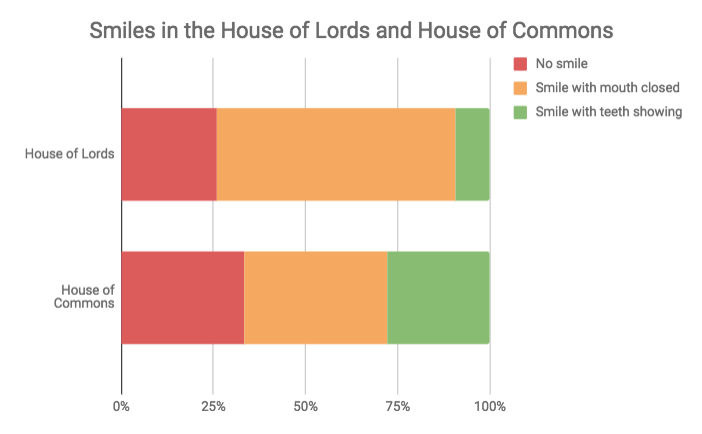 Men versus women: who is happier?

In contrast to their male counterparts, women in both Houses appear happier: more than 68% express their happiness with a smile in their profile picture and around 20% show a more reserved smile with no teeth. Only less than 8% didn’t smile at all. Men are more reluctant to show a full beam. Around a third of them don’t show their teeth in the pictures and almost 25% wear no smile. However, 43% of them smile with their teeth showing (which is still 20% less than among the women). 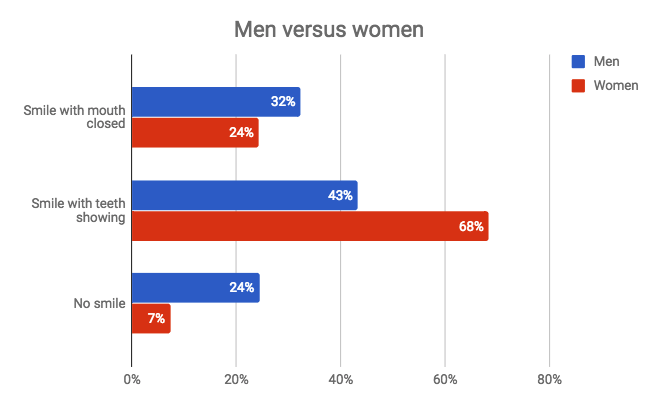